Some time in 1990 I was walking along the quayside in Portsmouth, Britain, thinking it might be fun to stop at one of the many tattoo joints to have a butterfly inked on my shoulder.  My soon-to-be husband looked at me with horror. “Are you joking?” he said, “Portsmouth is about sailors and pirates. Unless you are after a skull and crossbones, I don’t think having a tattoo here is a good idea.”

Nearly three decades later I still don’t have that butterfly but this week, when I walked into Fine Line, t

he new tattoo and piercing studio on Mackeurtan Avenue in Durban North, I knew this was a place where I could feel comfortable having a tattoo done. Fine Line is owned by Wade Latham and Etienne Louw, friends who have together worked in uMhlanga real estate for 17 and 15 years, respectively.  Latham matriculated at St Henry’s Marist College and is married to Natalie. The couple have three children, Gabriella, 19, Cade, 11 and Luke, 5.  Louw originally hails from Bloemfontein and is married to Karen. Their daughter, Brittani, 24, is a doctor in Stanger.  Both men share a passion for body art and are well covered in intricate designs. They are also acutely aware of the responsibility that comes with tattooing and it is this that has motivated them to open Fine Line.  “I have gone to various artists over the years and recognised there was a huge gap in the industry for something more upmarket,” said Louw.  “Also there is so much more one can offer like covering scars, varicose and spider veins, as well as stretch marks, but you need a place where clients feel comfortable.”   Latham said he wanted a place where hygiene took priority and customers were given a high-end service.

Their new studio is chic. On arrival I was offered a cappuccino and we settled down to chat on a leather couch in front of a giant fish tank. The stud 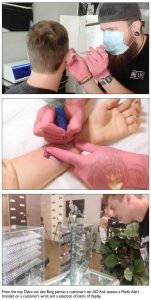 io is bright and clean and decorated with offbeat art works linked to tattooing and piercing.  The tattoo artist is Adrian Kok, also known as AD, with Terrel Gouws working as AD’s apprentice and Dylan van den Berg, who is the body modification artist.  Various tattoo artists from around the country and the world are scheduled to make guest appearances here.  Jade du Plessis manages the reception and is also a walking advertisement for what the artists are capable of, be it tattooing or piercing. Du Plessis also manages Fine Line’s social media platforms which, in the three weeks since opening at the beginning of March, exceeded 13500 “likes” on Facebook.

The Fine Line team have a clear, self- imposed code of conduct, which I found very interesting, especially with my teenage son sitting next to me during the interview quietly planning his own body art. “No tattoo if you are drunk,” says Latham, “and yes, we do get people bravely wandering in after a few drinks.” Louw says there are also no tattoos for anyone under 18 unless it is reconstructive. “And nothing on the neck, face or hands for someone having their first tattoo. A tattoo is permanent.”  The team is keen to do pro bono work for breast cancer survivors who have undergone mastectomies. “It’s something we want to pursue as we become established,” says Louw.

On the day of my visit a client was having her Medic Alert details tattooed on her wrist. “You see, the benefits are endless,” says Louw.   The piercing side of the business is not as dramatic as tattooing but also offers the opportunity for fun body art. Du Plessis, for instance, had a dermal implant at the base of her throat which, at first glance, looked like the pendant of a necklace. She had a second implant on a temple.  “A piercing is far quicker than the time-consuming process of tattooing,” says Louw.  The implants and variety of rings on offer are among the biggest choices in Durban.

The team welcome walk-ins. They advise clients to have an idea about what they want, which can be developed with the body artists.  The price hinges on the work involved and is discussed with the artist.  While my teenager might think I am too old for a tattoo, I might just do it now. At least at  Fine Line I know that whatever design I go for,  it will be a work of art.    ~ CAROL CAMPBELL