Only men circumcised as adults can experience the difference a foreskin makes.  Many men circumcised as adults regret the change. Playing guitar causes the fingers to get calloused from playing. That’s similar to what happened to my penis after circumcision.  After the circumcision there was a major change. It was like night and day. I lost most sensation.  Slowly the area lost its sensitivity, and as it did, I realised I had lost something rather vital. Stimuli that had previously aroused ecstasy had relatively little effect.  Circumcision destroys a very joyful aspect of the human experience for males and females.

However, for a circumcised guy, all is not lost.  Quite by accident I read about the effect that the Dydoe Piercing has on 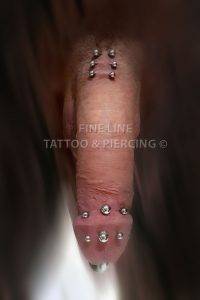 circumcised men. The Dydoe Piercing is not suitable for everybody as you really need a well developed corona of the penis (ridge/rim), but to those it suits it is a God send, or should I say a Jehovah send. The piercing is supposed to have originated within the Jewish community. Due to the ritual circumcision of all males within the Jewish faith, it would be no real surprise that it came from them. The Dydoe Piercings are said to restore the sensation to the glans. This may well be true for most, but as with some other piercings it is not always the case. Again, it all depends on how sensitive your corona is.  Personally the effect was immediate and mind blowing.  Even the same day when there was quite a lot of sensitivity from the actual piercing the sensation in the corona was remarkable.

It is said to be one of the most painful piercings for men.  Considering the life changing effect it had on me I would sit through those few seconds of pain again and again.  In my case it was definitely a case of “no pain, no gain” except the the gain from the Dydoe Piercing outweighs the pain by miles!